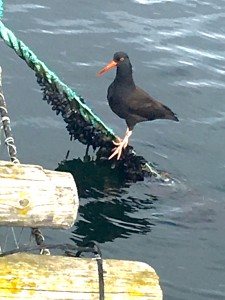 Congratulations Zach Loescher for your photo of oystercatcher eating mussels from the mooring line of the mussel rafts in Penn Cove. The mussel rafts provide a safe feeding and roosting site for oystercatchers and many other marine birds. Although the species is not considered threatened, its global population size is estimated between 8,900–11,000 individuals. The black oystercatcher is a species of high conservation concern throughout its range (U.S., Canadian, Alaskan, and Northern & Southern Pacific Shorebird Conservation Plans), a keystone indicator species along the north Pacific shoreline, a management indicator species in the Chugach National Forest, and a U.S. Fish & Wildlife Service focal species for priority conservation action.